2020’s Migration Trends: Where is Everyone Moving? 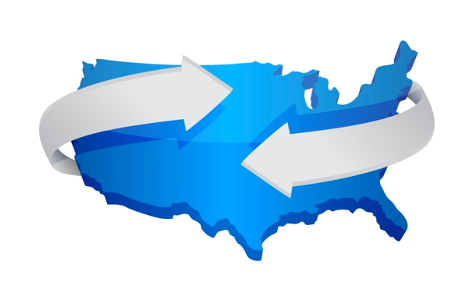 Please enjoy this article brought to you by northAmerican Van Lines.

2020 was definitely a year of changes and surprise. But what about people that planned to move? Did they still move? And what effect did the pandemic have on moving patterns? Below you’ll find highlights from our 2020 Moving Trends and Analysis guide.

Since 2015, northAmerican® Van Lines has analyzed and released its migration data to the public. This data serves as a valuable tool for gauging annual trends for both inbound and outbound moves within the United States. When comparing year-over-year trends, we are able to derive an understanding of what may be driving residents both to and from specific states while also taking stock of what these figures may imply more broadly in terms of societal, cultural, and economic trends.

Like many other businesses at the outset of the pandemic, our initial thinking was that our volume would likely contract. Interestingly, however, we saw only a slight loss in move volume during a couple of spring months. Ultimately, our overall numbers were relatively similar to those of 2019. Despite COVID-19 and subsequent restrictions, overall interstate moves remained strong.

For our migration report, we reviewed data for household moves in and out of states. We focused on states with a high proportion of inbound or outbound moves, and we set an absolute value of 400 or greater. By setting that value, we took out smaller states that may have had fewer moves but a larger proportion to prevent skewing the data.

Of the top seven outbound moves states, four were from the northeast this year. This same region was also noticeably absent from our top inbound states list as well in 2020. New York (#2) and New Jersey (#3) lost the greatest number of residents out of the northeastern states. In fourth place on our outbound moves list was Maryland, with Pennsylvania rounding out the top seven.

Sunshine and Warmer Climates for Many in 2020

Southern states have performed well on our inbound lists in recent years and 2020 was no exception. Last year, southern states continued to welcome more new residents than they lost across the southwestern and southeastern regions.

Arizona and South Carolina have consistently ranked within our top five inbound states list each year since 2015. In 2020, Arizona finished at second while South Carolina hit number four. Its northern neighbor, North Carolina has also been enduringly popular and took the fifth spot for most inbound moves of 2020. One 2020 southern standout was Tennessee. The famed country music state advanced two spots on the inbound moves list this year, hitting a high note at number three.

Since the start of this report in 2015, both Florida and Texas have demonstrated a lasting draw for many migratory Americans. Despite the curveballs that 2020 threw, both states still made a good showing, with Florida at number six and Texas at number seven on the inbound moves list. With respect to Texas, a good deal of those moves were job-related.

Also worth noting this year is that Georgia, for the third consecutive year, remained absent from our top eight. An iconically southern state, Georgia had made our list in years previous to 2018. Regardless, thanks to the year-over-year performance of other states, the south clearly remains attractive to those seeking a new place to call home.

Since we began this annual study in 2015, midwestern states have made an appearance on our outbound list each year. The midwestern state most of note this year is Illinois. As of this year, The Land of Lincoln has held its spot at #1 for outbound moves for three consecutive years.

While not as glaringly obvious as Illinois, Michigan also further cemented an enduring trend of fewer people identifying as “Michiganders” in 2020. Despite not being in the top five for most outbound moves, Michigan has now made an appearance in our top 10 for five consecutive years.

In looking at our reports over the years, select western states have attracted notable amounts of new residents. In a break from our previous reports, however, 2020 proved to be a year that Nevada, Oregon, and Washington failed to make the top inbound states list.

Despite this, other states seemed to really pick up the slack for the western region, specifically Idaho and Colorado. Over recent years, Colorado has steadily climbed the inbound moves rankings, and this year, it bouldered in at number eight. For the last six years, Idaho has been in the top 10 states for inbound moves. More recently, the state famous for its spuds has claimed the number one spot and continued to prove its continuing popularity in 2020 by remaining there.

California was notable this year, but for other reasons, ranking fourth in our outbound states list. For the last three years, California has appeared as a top-five outbound state. While its location within the top 5 has changed year to year, it is clear that California residents are moving out of the state in significant numbers.

Curious to find out more? To learn more about northAmerican’s 2020 Migration Data, including valuable analysis and research, visit our guides page to download our, 2020 U.S. Moving Trends & Analysis guide.