E.E. Ward is proud to announce the hiring of our newest Relocation Coordinator, Airnoi Kennedy. Airnoi, or Noi as she likes to be called, is a Laos native who has been living in 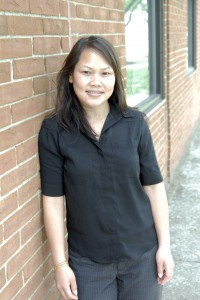 the United States since the age of 7. She has lived in Columbus since she was a child, with the exception of college. She attended Keiser University in Florida, where she studied to become a paralegal. Shortly after graduating, Noi returned back to Ohio so she could be

closer to her family. Once back in Columbus she found a job in logistics, working for a tech disposal company to help coordinate computer recycling. She then left the company to take a position as a moving coordinator for Berger Transfer and Storage. After leaving Berger, Noi found her current job here at E.E. Ward as one of our relocation coordinators, a position she is very excited to begin.

“After hearing about all the awards E.E. Ward has received, their community involvement, and how long they’ve been around, I’m excited to be apart of their growth.”

When she isn’t helping to coordinate moves at E.E. Ward, Noi enjoys fishing, cooking and eating with her husband.