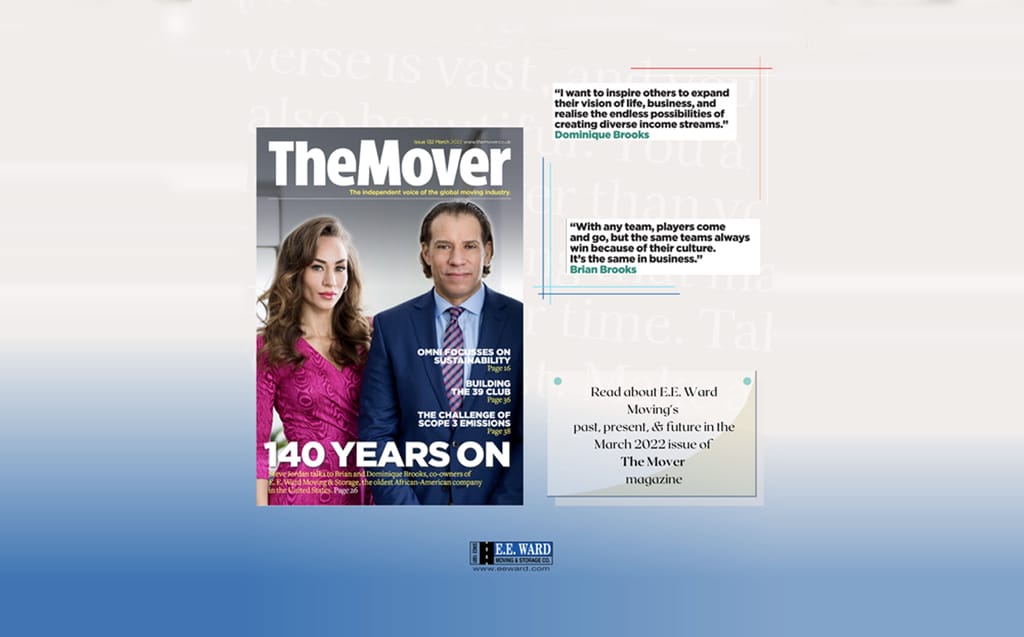 EE Ward Moving & Storage is honored to be spotlighted in ‘The Mover’ magazine and celebrated for our 140 years in business.

As the country’s oldest African-American-owned business, we’ve been able to turn what was a small wagon transportation service and an Underground Railroad stop into a successful moving company with a rich history. We’ve been able to do this through a continued commitment to upholding the mission of our founder, John T. Ward, and through our utmost commitment to the moving experiences of our clients and customers.

With over 140 years in the business, EE Ward Moving & Storage has served customers since moving trucks even came to be. In The Mover’s highlight, author Steve Jordan talked to co-owners Brian and Dominique Brooks, who have owned this historic company since 2001.

EE Ward Moving & Storage was founded in Columbus, Ohio back in 1860 by John T. Ward. With the 13th Amendment only recently passed, many slaves had no knowledge of the illegalization of slavery and made use of the Underground Railroad to make their escape from slavery in the South. John T. Ward both utilized his home and his at the time small wagon transportation business to aid escaped slaves in their passage to the North, where they would be able to attain their freedom.

John T. Ward then began to use his business to transport feed, grain, and household items – which is where EE Ward Moving & Storage got its start. The company was taken over from Edgar Earl Ward in 1881, who ran the company until his son, Eldon, took over and ran this company for 50 years.

In 2001, Brian Brooks, Eldon’s godson, was able to take over the business and keep it in good hands. The Brooks breathed new life into the company, which was in need of a revamp and modernization. The Brooks invested and brought new life to the old-fashioned operation, and in turn, has revitalized EE Ward over the past 20 years.

In 2007, the company became an agent for North American Van Lines, which only cemented it as one of the most reputable moving companies in the country, and has only cemented its mark on the relocation industry. Thanks to its rich history and rich future, EE Ward Moving & Storage continues to make its mark on history and on the customers we’re able to serve.

The Mover celebrates the culture and history EE Ward Moving & Storage is built upon, and our company is honored to continue to honor our founder and continue our mission. Learn more about EE Ward, and read author Steve Jordan’s highlight here.