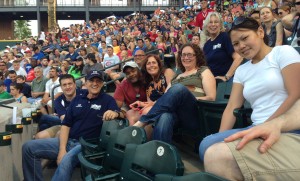 Some of the staff at the game.

The E.E. Ward staff traveled to Huntington Park on Monday night to watch the Columbus Clippers beat the Scranton Wilkes-Barre RailRiders 6-5 in extra innings. What began as a lethargic start for the 27-18 Clippers ended in a thrilling finish when Chen-Chang Lee knocked in Matt LaPorta for the winning run in the bottom of the 10th inning. While the employees clearly had a blast in their seats on the first base line, it seemed that they enjoyed the 10 cent hot dogs nearly as much as the exhilarating ending. Judging from the scores of empty hot dog wrappers scattered around the seats, everyone really put their spare change to good use.

Hal Byram, E.E. Ward’s Vice-President of Operations, surprised the crew at the bottom of the second inning by announcing that he had four extra front-row tickets behind home plate. After a series of trivia questions, he ended up passing the tickets on to Tom Kelley, VP of Company Finance and Administration, and his son, as well as Judith Truman, 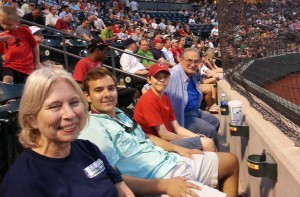 The trivia winners behind home plate.

Director of Marketing, and myself, Pete Pajor, the new intern. As if our previous seats in the front row on the first base line weren’t good enough, Hal’s tickets were awesome, giving us a prime view of the game.

Designed as a reward for the stellar work of the staff so far this year, the game was a opportunity for all employees to sit back, relax and socialize with each other. As one of the new office interns, I can attest that it was a great chance to really get to know my new co-workers in a fun, relaxed setting.