Senior Retirees: We Are Back, Big Cities 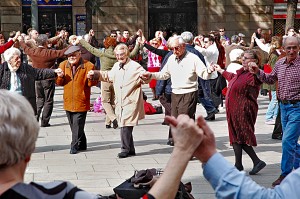 The trend that millions of seniors are moving back to big cities seems more and ore inevitable. Peace of mind is what E.E. Ward Moving & Storage offers to senior citizens and their families when the need arises to move to a new residence. In the past years, E.E. Ward has built up a strong connection with customers by its professional senior moving service. Sheila Straughen, our Relocation Coordinator at E.E. Ward, found that many of her senior customers tend to move back to bigger cities like Washington D.C or Chicago nowadays. According to her experience with those customers, Sheila has been told that the complete system of medical service, the convenience of transportation and the comfortable environment of the retiree centers seem appealing for them to move for.

“’What’s it going to look like where I’m going? What’s going to happen to the things I leave behind?”’ All these questions have been asked by senior clients seeking moving services. Moving for a senior can be very stressful. E.E. Ward is  not only packing and moving them, but are also taking care of their clients and their emotions by calming their fears with competent and capable counsel and services.

According to Census Bureau projections, the population aged 65 and over will grow by 36 percent to almost 55 million in the decade. It’s not just that there is a greater proportion of older Americans because people are also living longer. In 2011, the 65-74 age group was about 10 times larger than in 1900, but the 85+ group was 40 times larger. As baby boomers retire in droves, cities big and small are doing what they can to lure them, or keep those they have, by redesigning their services and infrastructure. That’s partly because retiring boomers wield enormous economic clout. By 2017, the U.S. adult population age 50 and older will control 70 percent of the country’s disposable income.

Before boomers started retiring, studies had already shown that retirees migrating into big cities can help lift local economies. For example, a 2006 study in Georgia estimated that if the state had held onto just 10 percent of its migrating retirees in 2007, it would have experienced significant growth in jobs, personal and disposable income, and net state revenues. And a 2011 study in South Carolina found that an influx in retirees in two counties was associated with wage growth, a rise in home values, job growth, and higher rents. And with the number of seniors who tend to move back to big cities is increasing, competition among cities for retiree dollars is heating up. States like Mississippi, Texas, and North Carolina have set up programs to designate cities and towns that meet certain criteria such as offering quality medical care and recreational opportunities for seniors.

For senior people themselves, living in the urban area or city centers would benefit their life a lot in many ways. For example, they do not have to drive around for the transportation services are safe and sound. Especially many states and cities have stated the improvement of transportation services for seniors. In a 2010 American Association of Retired Persons, about half of adults age 45 or older said living in a place where it’s easy to walk or living near church or social organizations was important to them. For example, In Columbus Ohio, planners are clustering housing units around transit hubs, tearing down large retail spaces in malls, and rebuilding them closer to the street to make them pedestrian friendly. Besides, moving back to cities also helps seniors’ children to take a good care of their parents or older relatives since many of them are going to be busy working and living in big cities. It will be more convenient for these young people to look after their beloved elders nearby.