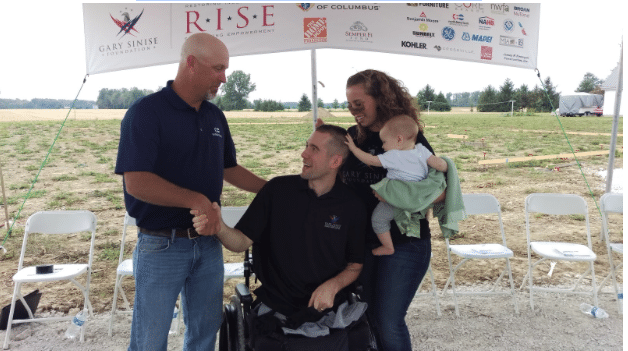 E.E. Ward’s Jeff Johnson meets retired U.S. Army Captain Nick Vogt along with his wife Lauren and their child. Vogt and his family will be receiving a specially designed smart home through the Gary Sinise Foundation RISE program.

A ground-breaking ceremony for retired US Army Captain Nick Vogt was held at the Sacred Heart of Jesus Catholic Church on September 19th in Shelby, Ohio.  The event was for the unveiling of a specially adapted smart home designed for wounded veterans. Organized by the Gary Sinise Foundation’s RISE program, over 60 smart homes to accommodate wounded veterans have been built. 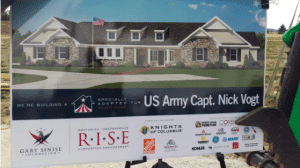 NorthAmerican Van Lines is a supporting sponsor of the RISE program. The NAVL agent network contributes by handling the move of furniture and furnishings after the new home is complete.

“It was a humbling experience, I’m a veteran myself and talking to Nick showed just how much veterans sacrifice to help protect countries and citizens through their service,” said Jeff Johnson, E.E. Ward’s local operations manager. Johnson was there to represent North American Van Lines and the entire agent network in support of the event.

In 2011, Vogt was patrolling Afghanistan when his team discovered a weapons cache.  While investigating, Vogt stepped on and triggered an IED.  The explosion claimed both of his legs and resulted in chronic brain seizures.  This new home will be designed to better accommodate his needs than a standard home.

The team at E.E. Ward would like to thank our active duty and retired service members for their dedication to protecting our country and citizens abroad.