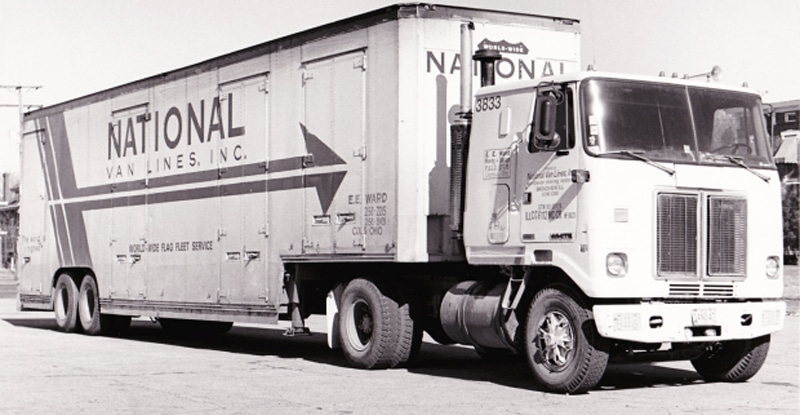 John T. Ward was born in Virginia and came to Ohio in 1828. He eventually settled in the Reynoldsburg area, and became a conductor on the Underground Railroad at 22, aiding slaves in their escape from the South to the North through Central Ohio beginning in 1842.

Today, the full-service moving company’s current owners are husband and wife Brian and Dominique Brooks, who purchased the company from Eldon Ward, the great-grandson of John T. Ward and Brian’s godfather, in 2001 with Otto Beatty. Beatty left the company in 2015.

Eldon Ward owned and ran the company for 50 years prior.

With warehouses in Columbus as well as Charlotte, North Carolina, E.E. Ward’s reach is now nationwide.

Being a part of a legacy business has provided great inspiration for the Brooks.

“We draw so much inspiration just from the story the legacy, the culture of the business, which is something that we see as being a vital part of our business,” said Dominique.

“We have a unique scenario where it has a wonderful legacy, lots of goodwill, and it’s a wonderful foundation,” said Brian. “You see yourself as not only a business operator or entrepreneur, but you’re also a caretaker of a great legacy and a great story.”

Dominique says the culture of E.E. Ward is serving your community and following best practices.

“Eldon Ward would say, ‘Do what’s right, come what may,’” she said. “It gives you goosebumps sometimes when you think about it. We know now that what they did in 1881 matters today.”

E.E. Ward has a fashion line commemorating the legacy of the company. And this year, the company will release a book in celebration of the 140-year milestone.

They want to make sure this piece of history is never forgotten, said Dominique.

“This is one of many stories out there of entrepreneurs and inventors and so many people that help pave the way to get us to where we are here today and it’s been left out of history,” she said. “John T. Ward started with the Underground Railroad, but not a lot of people know. There’s a lot of people that really helped get us to where we are and it took a community to do it.”

Brian Brooks said with the pandemic, they aren’t sure what other events will take place this year in celebration of the milestone.

Once they can celebrate, the Brooks are hoping to have Deloris White, the last direct descendent of John T. Ward to work in the company, be a part of the commemoration. The niece of Eldon Ward, White ran the company for him once he retired and stayed on for some time after Beatty and the Brooks purchased the company.

Getting that perspective is another reason for the celebration, said Dominique.

“Folks aren’t going to always be here forever and so it’s important that they have a voice and we’re able to share these stories and especially if we can get their perspective too,” she said.

Brian said Columbus had a big impact in where John T. Ward decided to start a business, in that this is where he decide to plant his roots.

“He felt a special calling because he had been able to help others [as] a part of the overall larger operation of the Underground Railroad and help people escape to freedom in the north,” he said.

He said there’s stories of inspiration of what people overcome all of the time, and we learn new ones every day, especially ones coming out of the African American community – from John T. Ward, who took the risk and became a counterpart in what is called one of the greatest freedom movements in history, to his great-grandson Eldon Ward, who became the first Black chairman of the Columbus Foundation, was on the board of the United Way and was heavily involved in the overall advancement of the Black community in Central Ohio.

The legacy and history is something the Brooks what to continue to honor.

“We know that what we’re doing today it’s going to matter in the next 100 years,” said Dominique. “We’re sharing the history, the legacy, keeping the culture alive, because I believe that’s one of the most vital components of our business.”

“Our goal is to be caretakers of that, to see it into the next 100 years, and hopefully inspire other minorities in our community to embark on entrepreneurship, and to start, because there’s power in the start,” she said.