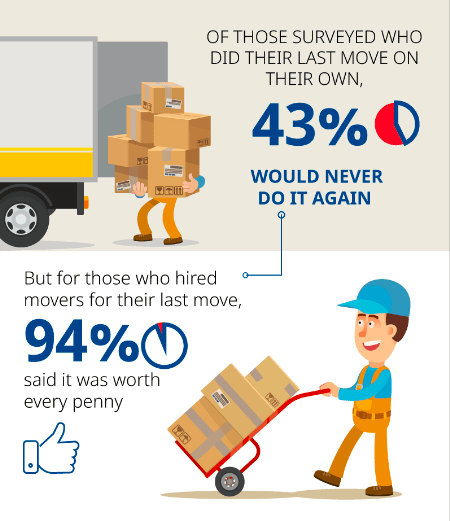 Enjoy this article brought to you by: northAmerican Van Lines

Moving a household across country, is an experience few people have had. Recent research conducted by OnePoll on behalf of northAmerican offers insight from 1,000 people who have moved within the last three years on American attitudes towards moving in general and the preferred way to move.

If you had to choose, what would you say the most stressful event in life is? A new survey found that it’s not having kids or even starting a new job – but rather moving.

The survey asked 1,000 Americans who have moved within the last three years about their experiences and the growing pains that come with moving on.

Whether they did their most recent move themselves or hired a moving service, 45% of respondents said moving is by far the most stressful event in life.

Next in line for life’s most stressful events was going through a breakup or divorce at 44%.

Conducted by OnePoll on behalf of North American Van Lines, the survey found 64% of respondents said their most recent move was one of the most stressful things they’ve ever experienced.

In fact, of those surveyed who did their last move on their own, 43% said they would never do it again.

The top stress points of an independent move included moving their furniture through doors, closely followed by pivoting furniture up and down stairs.

On the flipside, a whopping 94% of respondents who hired movers for their last journey (578 respondents) said it was worth every penny.

Regardless of who moved them from point A to point B, the survey found the most stressful parts of their move was packing up their belongings (48%), closely followed by sorting out what to keep and what to get rid of or donate from their homes (47%).

On top of these stress points is, of course, the price tag of the move and the survey found the average cost was over $1,500.

Respondents also shared that they then spent an average of $211 to cover unexpected costs that pop up during the move.

The average move will also have four broken or damaged items – and they all may not be accidental.

Thirty-five percent of respondents admitted to secretly breaking or losing an item that belonged to a significant other during a move because they didn’t like it.

“Moving, particularly when the move is to another state, is something few people have experienced, so it’s not surprising to see moving ranked as a leading cause of stress,” says Kevin Murphy, Vice President and General Manager of North American Van Lines. “However, using a professional mover – as indicated by the survey results – can eliminate a significant amount of stress related to moving because you are working with professionals experienced in safely prepping furnishings for transport and getting belongings from the truck to the new residence safely.”

The top reasons behind respondents’ moves included a new job (19%) and job relocation (16%).

Thirteen percent of respondents shared their move was impacted by their desire to be closer to their family as well.

“Whether the distance you’re moving is short or long, or the reason for your move, anyone moving should ask themselves some important questions before deciding to do it themselves or hire a professional,” adds Murphy. “Specifically, what do they value more – money or time? How much do they value their belongings – and do they know how to wrap belongings or pack a truck in a way that will protect their materials during transport? What is their peace of mind worth? Are they comfortable driving a loaded truck in traffic? Determining the answers to these questions will help individuals moving to make the right choice in the manner in which they move, and hopefully make the moving process as stress-free as possible.”

MOST STRESSFUL PARTS OF MOVING