Elvis Was In The House 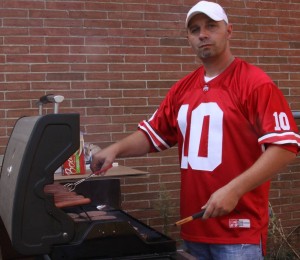 Now that the weather has turned cold, it is even more pleasant to reflect on the Columbus mover E.E. Ward summer grill series.  (Braving the heat and humidity on a fine Columbus summer day to get smoked out over a blazing grill has more appeal when there are two inches of snow and ice on the ground.)

Each Wednesday, the guys would roll the grill outside the warehouse and the grill-masters took turns flipping burgers, hot dogs and veggie burgers (for the veg-heads on the team) to feed the E.E. Ward crew.  Co-owners Brian Brooks and Otto Beatty surprised the team by hiring E and Company Entertainment to send over an Elvis impersonator to entertain us during lunch.  It was great fun listening to familiar tunes (for those of us of a certain age), dancing and singing along with the King.

Clearly, the E.E. Ward team support for The Ohio State University Buckeyes has had a lasting effect in helping our football team maintain a winning season.  It takes a winning moving and storage team to know one when we see it! 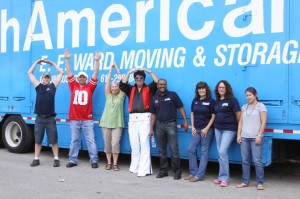