E.E. Ward is happy to announce and excited to welcome the newest member of the staff, Hal Byram. Hal holds the distinction of being the company’s first Vice President of Operations and Services as E.E. Ward continues its growth early in this decade. With him, Hal brings over 25 years of driver and administrative experience in the moving industry. As a driver, he was designated as being apart of Allied’s Master Mover Fleet which uses a set of 10 criteria and is a honor only the top 5% of drivers receive. Since then he has spent three years as an Operations Manager and the past five functioning as General Manager for a company in the moving industry. Not surprisingly, when asked what was important to him as a driver he responded simply, “customer satisfaction.” When describing his previous experiences in the moving industry he recounts the opportunity to meet a lot of interesting people and further as his time being, “rewarding.” Hal is equally excited to join the E.E. Ward staff and plans to contribute to the expansion and continued success by promoting and increasing brand recognition, and improving the quality of service for residents moving in Columbus. 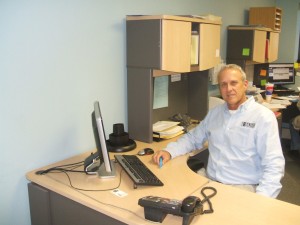 From the Seattle Pike’s Market to the the French Quarter in New Orleans and all the way up to Bangor, Maine for the fresh lobster Hal Byram has experienced the country’s finest seafood. Traveling the country has allowed Hal to quench his thirst for his favorite cuisine. Hal’s best experience can be described with one word, Wahoo! While in Puerto Rico, his favorite vacation spot, Hal caught a Wahoo fish and describes it as the, “best seafood ever.” Along with fishing, Hal likes to stay active. He has been running road races for years and even completed the Boston Marathon. During one five year stretch as a driver, Hal ran every single day! His passion for running stretches back to his college days at Grand Valley State, where he ran mid-distance for the track team. The Michigan native has one daughter who currently lives there. Hal now lives in the Columbus area with his wife, Julie, and will still proudly admit to being a University of Michigan football fan.

Despite Hal’s unfortunate choice to cheer for Michigan football, E.E. Ward considers itself fortunate to add such an upstanding, experienced, and personable asset to the staff. The intentions of bringing such a qualified professional on board is simply a way for E.E. Ward to continue the trend of improving quality and service standards provided to the residents moving in Columbus every day.