This past weekend, Co-Owner Otto Beatty and Operations Manager Chris King found themselves in an unusual situation as Columbus residents representatives of the “Buckeye Nation.” As a North American Van Lines agent, they had the privilege of hosting North American Van Lines and Allied executives Brian Risley and Vikas Sausena in Columbus. A day at Ohio Stadium is just what these football fans needed as the busy summer season of the moving industry transitions to fall. But wait, when Brian and Vikas arrived in Columbus, they were not adorned with the scarlett and gray colors that have become synonymous with and sacred to Buckeye fans. Instead, they were dressed in black and “Old Gold,” Purdue University colors.The Buckeyes were set to play the Boilermakers on that Saturday! 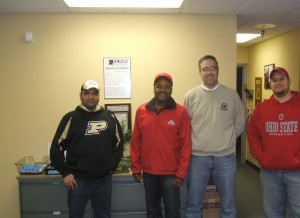 Of course, this was no coincidence as both Brian and Vikas are graduates of Purdue University. Otto and Chris were happy to welcome fans of their favorite team’s foe. Fortunately, the group was able to put their team affiliations aside and enjoy a beautiful Saturday afternoon at The Horseshoe.

In addition, Otto and Chris had the opportunity to show Boilermakers alumni E.E. Ward’s own “campus.” Touring the facilities for the first time, Brian and Vikas were provided insight into how E.E. Ward continues to improve and help residents moving in Columbus to be best served per their moving and storage needs.

By the way, the Buckeyes topped the Boilermakers in superd overtime fashion. Allowing Otto and Chris to take back “bragging rights” the Boilermaker’s held the year prior.