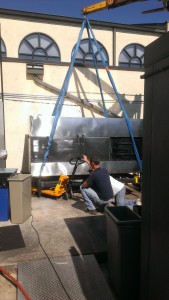 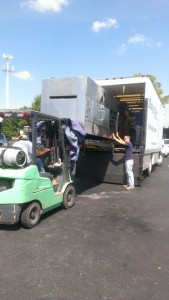 It takes a team

E.E. Ward Moving & Storage Co. moved one of the city’s “Best Caterers” (according to the readers of Columbus CEO Magazine) this past weekend.  In addition to its office furniture and equipment, the Columbus mover also relocated Two Caterers’ commercial-sized kitchen appliances.

Tackling the delicate and mammoth task of moving and positioning the Two Caterers’ ovens and smoker into its new location, E.E. Ward easily hoisted and moved the tonnage to the new venue.  Known originally as a household mover, E.E. Ward has expanded its services to accommodate a wide variety of commercial and business moves.   From restaurant supplies to voting machines, the E. E. Ward team is dedicated to providing an unparalleled sense of comfort and security when relocating and storing its customers’ possessions.

“E.E. Ward congratulates Two Caterers on their move to downtown,” said co-owner Otto Beatty.  “It is a privilege for us to help the Two Caterers team relocate their office and industrial restaurant equipment, and get settled into their new location.”

Two Caterers, a certified woman-owned business, has been a part of the Columbus scene for over a decade.  The company is working on a total renovation of the space that not only gives the business a larger kitchen and room for operations; it also creates a venue that allows Two Caterers to start having on-site events for the first time.