E.E. Ward Moving & Storage Co. is proud to join with the Women’s Fund of Central Ohio in celebrating this milestone.  We are sharing the Women’s Fund posting from its website and honor them and women around the globe striving for equality.

“In celebration of the powerful women who came before us and the voices of future women leaders, The Women’s Fund shares one woman’s perspective.

In 2014, as a 21 year old woman, I often take for granted the privileges the women who came before me made possible. Each year, or actually multiple times a year, I am able to drive to the polls and cast my opinion by voting. More importantly, I have the power to choose if I even want to vote. If I had been born 100 years earlier, I would be struggling for this privilege. My voice would be diminished or nonexistent because I would not have the choice to vote. But today, in America, it’s not a struggle- it’s an option.

August 26th marks Women’s Equality Day, which commemorates the date in 1920 that women’s right to vote officially became a part of our constitution as the 19th Amendment. Women worked for over 72 years to make the right to vote a possibility for all women. Iconic women, like Susan B. Anthony and Elizabeth Cady Stanton, worked together as change agents in the women’s suffrage movement to make this difference.

As I reflect on this day, I think about part of the mission of The Women’s Fund – to “amplify the voices of women and girls.” Since I wasn’t born 100 years ago, there are many other ways to amplify my voice. I can be an advocate or donate; however, the women in 1848 understood the importance to secure the fundamental right to vote as a citizen and a woman. It is a foundational aspect of our country, and without it, women’s voices would be devalued overall. In 1920, women’s voices were validated and were finally represented as equal. They helped amplify my voice now.

In 1971, Representative Bella Abzug of New York pushed Congress to pass a Joint Resolution of Congress to make today Women’s Equality Day. She wanted to remember the efforts of the women suffrage movement, but also to draw attention to the ongoing efforts towards complete equality each year. Bell Abzug recognized that women took a huge step toward equality with the 19th Amendment; nonetheless, she realized there is more work to do. 43 years later, Women’s Equality Day brings attention to the current efforts to bring equality.  An important effort in the past few months and year is the awareness of smaller gender equalities that still exist in our daily lives. This includes how we speak about or to women, how others portray them, and more. It is important to bring awareness to people for change to start occurring.” 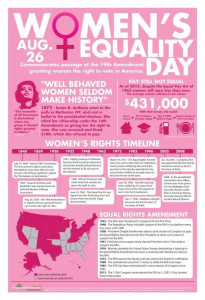