As a way to thank and recognize employees for the outstanding work done in 2013, E.E. Ward Moving & Storage held an Appreciation and Awards Breakfast on Friday, December 20th. This was the first of what is sure to become an annual event for the company. 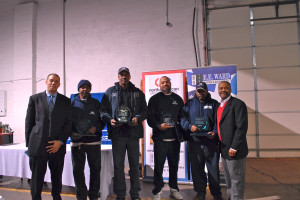 The current owners of E.E. Ward, Brian Brooks and Otto Beatty, bought the business in 2001 when Eldon Ward, decided to sell the family business. Since taking over, the two have upheld the legacy and tradition of excellence established by the Ward Family, as well as having been successful in expanding and growing the business. At the Awards Breakfast, both men discussed how the company could not have achieved such success, nor could it continue to achieve success, without the hard work and dedication of the crew members. In order to recognize the exceptional work and acknowledge outstanding years of service, Brian and Otto presented the Service Award to Jerome Davis, Raleigh Head, James Davis, and Lavan Wilson.

Jerome Davis has been with E.E. Ward for 20 years as a dedicated driver and mover. He is always willing to assist other employees or customers whenever he can. He is easy going, friendly, and continually receives outstanding reviews from customers.

Raleigh Head has never had a complaint from a customer. Having also been with E.E. Ward for 20 years, he is an excellent mover and is committed to doing things the right way. There is nothing that can be said about Raleigh that is not a compliment.

James Davis has been a devoted mover for the past 20 years. He takes pride in his work and doesn’t take short cuts when it comes to getting a job done. He is personable and always receives positive customer reviews.

While Lavan Wilson has been with the company half the amount of time as the other 3 recipients, he has more than proven his dedication to the company. He is an enthusiastic mover and is often requested by crew leaders for jobs.

Congratulations to these dedicated movers.  Their standard of excellence serves as the model for the E.E. Ward team in providing an unmatched sense of security and comfort for our customers in moving and storing their belongings. 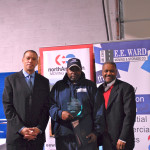 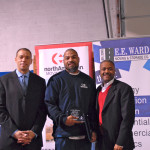 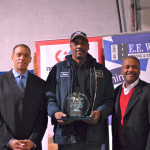 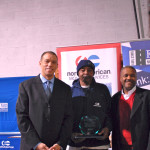