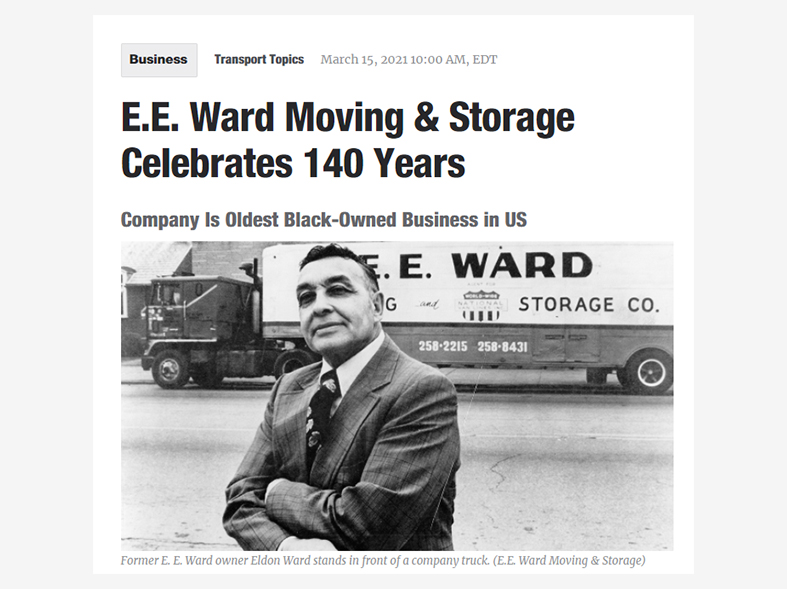 Transport Topics featured a story about E.E. Ward celebrating 140 years in business in their March 22nd edition. Transport Topics is the leader in trucking and freight news. Read the article below.

The Columbus, Ohio-based company provides local and interstate relocation and logistics services to residential, government and corporate customers. The company has a rich history that stretches back to 1881. It became the first Black-owned business in the U.S. at the time.

John T. Ward founded the company; it remained in his family for 120 years. Dolores White is one of the oldest living members of the family and was the last member to have owned the business.

“The beginning was with my great-great grandfather, John T. Ward,” White told local news outlet 10TV. “They went through depression, bigotry, competition but they still made it. They weren’t the people that wanted to just get rich, it was just to take care of the family.”

E.E. Ward President Brian Brooks now owns the company with his wife, Dominique. For Brooks, the legacy of the business invokes the thoughts of pride, honor and humbleness and stands for perseverance and true entrepreneurship.

“We’re the current ownership and current management and current team, but we’re just a piece of it,” Brooks told Transport Topics. “We give a lot of honor and grace to that story. The story of John T. Ward, the story of his son, his grandson and his great-grandsons and how they carried the company’s legacy for 120 years by serving and moving people with a high level of quality and care.”

Brooks already had a close connection to the business and its founding family long before becoming the owner. For owner Eldon Ward was his godfather. Brooks saw an opportunity to buy the business when White decided to sell it.

“I’ve said a lot of times that we see ourselves really as caretakers,” Brooks said. “We’re caretakers of a great legacy. It’s our responsibility, though, to keep the company relevant, strong and 21st century ready and things like that. The story is great, the legacy is great, and the feel-good side is great. But if you’re not strong at your core, and you’re not keeping people happy, you’re not delivering service as promised and excelling in that, the story and legacy won’t pay the bills.”

E.E. Ward is recognized as the oldest continuously operated Black-owned business in the country by the U.S. Department of Commerce and in the 2003 Congressional Record.

At the core of the mission of E.E. Ward Moving & Storage is a dedication to diversity and inclusion. To learn more about us visit our website.