Do it Yourself: Moving your Freshwater Aquarium and Fish

I recently relocated from Chicago to Columbus, Ohio, and contracted with E.E. Ward 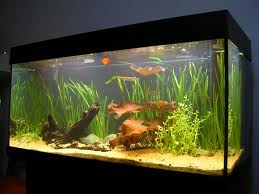 Moving & Storage to move my belongings.  E.E. Ward was great to work with in scheduling, wrapping, packing, loading and transporting my furniture and boxes.  However, they do not move aquariums and fish.  Since I was driving back to Columbus, I decided to move my fish and tank myself.  Here’s how I did it:

Retaining the PH environment is critical to successfully re-introducing the fish back into the tank. The tank water needs to be transported, so I saved the plastic water gallon jugs I purchased over time and poured the water into them.  Leave a few inches of water in the tank so that the gravel, etc., remain covered.  Do not clean the filter; just put it in the tank with the other equipment.

Moving tropical fish requires a method for maintaining the environmental balance and temperature.  I purchased an insulated cooler large enough to hold the fish containers.  Each breed/variety must have its own container: tetras in one, Plecostomus in his own container, Angel fish in another.  I bought plastic containers with lids and punched holes in the top for air.  Fill each with aquarium water, net and transfer the fish.  I had a friend come by to help with the transfer so while one of us netted the fish and turned them into the containers, the other quickly covered them so the disturbed fish couldn’t take that fatal jump.

I strapped the seat belt around the cooler in the front seat, and drove back to Columbus with the aquarium in the backseat.  Upon arrival, set the aquarium up and pour the water back into the tank, plug in the filter and fire up the heater.  It is important to allow the water to heat a few hours to the acceptable level before returning the fish into the tank.  I cautioned my daughter as she poured the fish back into the aquarium: the large Angel fish is a jumper.  Sure enough, he expressed his indignation by creating a tidal wave when he hit the tank, drenching my daughter.  I am happy to report that all of my fish survived and are still swimming two years later.

During my research, I discovered that there are specialty companies who move aquariums with fish, but the price for moving my humble 10 gallon tank was prohibitive.  I found several websites that generally addressed the process, but http://blogs.thatpetplace.com/thatfishblog/2011/03/25/how-to-move-your-aquarium/ is comprehensive.  Good luck with your move and hopefully my experience will help you when considering moving your tank.  Likewise, I highly recommend E.E. Ward to you for your moving and storage needs.  They have moved me four times, and each time was accomplished by thoughtful professionals who took care of me like family.