Columbus Runners Move for a Good Cause

As participants entered Mile 22, they passed through the Grandview Yard in front of the new Nationwide Insurance offices filled with a vibrant crowd of Grandview Heights students, teachers and parents cheering them on.  This station’s patient champion was Layla Mile. Layla, among many others, has had to move to the Grandview area to be close to NWCH for treatment of Batten Disease. Children with this condition develop progressive vision loss, intellectual and motor disability, speech difficulties, and seizures. 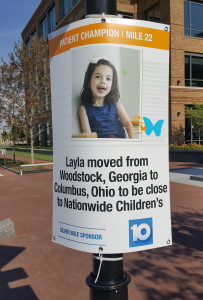 Layla was the Mile 22 Patient Champion, but many other children from Nationwide were present. The Grandview crowd was also joined by another smiling child, Mia. Mia took up a prime post in the middle of the boulevard to cheer runners as they made the turn toward the last 4.2 miles. Every mile of the marathon came with a story of strength and courage, making the Columbus marathon one of the most meaningful marathon out there. 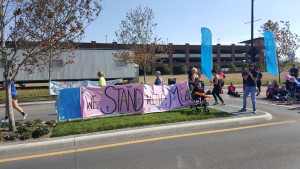 E.E. Ward Moving and Storage congratulates all the participants for getting out and making Columbus move for a great cause!