A Columbus Chamber of Commerce photographer visited the E.E. Ward headquarters on Wednesday to capture several photos around the warehouse.  The Chamber is developing a new online portrait of its members, and E.E. Ward was among the companies selected to be featured in the launch of the new member profiles. 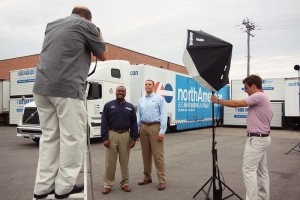 The photographer, Todd Yarrington, noted how helpful the E.E. Ward staff was, remarking that he appreciated how organized and cooperative they were. Yarrington took a wide variety of shots in and around the warehouse, using several different employees in the process. Be sure to look for some of these great pictures on the Chamber’s website.